All the Birds, Singing

“Brooding and brilliant All the Birds, Singing, is a big, deep and accomplished novel that I would press into the hands of any lover of words, and stories. She excels at creating character, a sense of place and a thrilling tension, infusing every page with a depth of feeling along the way. For a novelist as young as Wyld to display such emotional maturing is extraordinary. Wyld’s inclusion on our list of winners is not so much a discovery as a confirmation of a truly rare talent that needs to be watched.”

Jake Whyte is the sole resident of an old farmhouse on an unnamed British island, a place of ceaseless rains and battering winds. It’s just her, her untamed companion, Dog, and a flock of sheep. Which is how she wanted it to be. But something is coming for the sheep – every few nights it picks one off, leaves it in rags.

It could be anything. There are foxes in the woods, a strange boy and a strange man, rumours of an obscure, formidable beast. And there is Jake’s unknown past, perhaps breaking into the present, a story hidden thousands of miles away and years ago, in a landscape of different colour and sound, a story held in the scars that stripe her back. 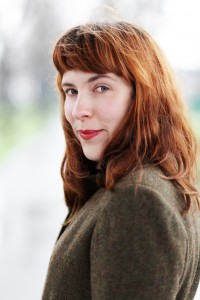 Evie Wyld is the author of one previous novel, After the Fire, A Still Small Voice, which was shortlisted for the Impac Prize, the Orange Award for New Writers and the Commonwealth Writers Prize, and awarded the John Llewellyn Rhys Prize. In 2013 she was named as one of Granta’s Best of Young British Novelists, having previously been named by the BBC as one of the twelve best new British writers. All the Birds, Singing was longlisted for the Baileys Women’s Prize for Fiction. She lives in Peckham, London, where she runs the Review Bookshop.