“Naomi Wood is a wonderful writer. I defy anyone not to enjoy Mrs. Hemingway, charting the tale of the four remarkable women who had the mixed blessing of becoming Hemingway’s wife. Full of gossipy detail, glamorous locations, believable dialogue (Hemingway speaks like we’d imagine Hemingway to speak), relationship truths, and human insight, it is a class act. Wood’s skill here is in weaving quite a lot of factual biography in without it ever weighing it down, and that takes real skill and confidence. Her sentences are as smooth and pleasurable as a well-made daiquiri making it a joy to read.”

In the dazzling summer of 1926, Ernest Hemingway and his wife Hadley travel from their home in Paris to a villa in the south of France. They swim, play bridge and drink gin. But wherever they go they are accompanied by the glamorous and irrepressible Fife. Fife is Hadley’s best friend. She is also Ernest’s lover.

Hadley is the first Mrs. Hemingway, but neither she nor Fife will be the last. Over the ensuing decades, Ernest’s literary career will blaze a trail, but his marriages will be ignited by passion and deceit. Four extraordinary women will learn what it means to love the most famous writer of his generation, and each will be forced to ask herself how far she will go to remain his wife…

Luminous and intoxicating, Mrs. Hemingway portrays real lives with rare intimacy and plumbs the depths of the human heart. 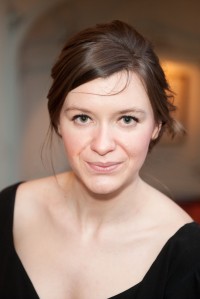 Naomi Wood was awarded the 2012 Eccles Centre British Library Writer in Resident Award to write and research Mrs. Hemingway. Mrs Hemingway is Naomi Wood’s second novel, and her research has taken her on field trips to Chicago, Boston, Key West, Cuba, Antibes and Paris. She spent five months as a fully-funded resident scholar at the Library of Congress in Washington DC to research the novel.

Film rights to her first novel The Godless Boys have been sold to Riff Raff UK Limited and Naomi has written the screenplay.  Naomi Wood is a Young Patrons Ambassador at the British Library and teaches Creative Writing at Goldsmiths University. She is a member of the Hemingway Society and the Historical Novel Society and lives in London.