British Writing is not all Grey

The past week has been an eventful week for British fiction writing. Last Thursday eight talented British writers were presented with prizes of £5,000 each at the Jerwood Fiction Uncovered Prize 2015 by India Knight. The Prize is set up to celebrate British writing and to shine a spotlight on British contemporary writers.

The spotlight, however, was singularly turned on another great British literary sensation published that same day. One British writer deserves our attention this week over all others it seems – E. L. James, the hugely successful writer of mass-market erotica. From the BBC to the Guardian, and everyone in between, the news headlines read Fifty Shades rewrite Grey breaks record in first week (BBC) and Fifty Shades of Grey sequel breaks sales records (Guardian).

We all understand the book publication as literary event phenomenon, and we all understand how the media works. We also understand that often it is the huge sales success stories such as E. L. James that can afford publishers to take risks in other parts of their commissioning. This is not an anti-Grey stance, but the singular focus on the book this week is exemplary of an issue regularly seen – a fanfare of attention around one or two writers with many talented writers not getting the attention they deserve. This is an arm being waved to ask that the spotlight shifts again to our other talented British writers. This is why we set up Fiction Uncovered in the first place, and why Arts Council England has supported us since 2010, and why Jerwood Charitable Foundation came on board to support us last year with the £80,000 prize fund that is much needed by British writers.

Today we’re launching an online campaign to make it known that British writing is not all Grey. As the fanfare around the publication of Grey subsides, let us use this moment to celebrate some other great British fiction writing.

We’re using the hashtag #BritishwritingisnotallGrey and asking you to support online. Tweet your favourite contemporary British writer or a great work of British contemporary fiction. 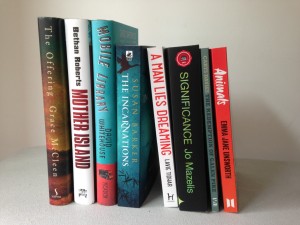 Sophie Rochester is Director of the Jerwood Fiction Uncovered Prize.