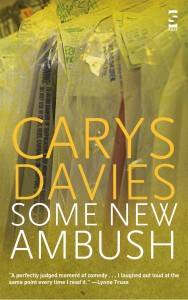 Some New Ambush is the first collection of short stories from award-winning writer Carys Davies. Love, loss, birth, death, betrayal, madness – they all lie in wait for Davies’s characters in their startlingly different worlds: a dry cleaner’s shop in contemporary Chicago, a mining town in South Wales in the sixties, a lunatic asylum in nineteenth century northern England.

Shot through with wit and aching emotional poignancy, these stories tell of how we attempt to confront the things life throws in our path – often when we least expect them, and in places where we never thought to look. They tell of the mistakes we make along the way, and of how we try to deal with the whole difficult, unpredictable business.

There is the boy who steps into his best friend’s clothes in a desperate bid to fulfil his dreams, the man who comes up with an amazing new invention to win the heart of the woman he loves, the bored young wife doomed to live on an island where everything is red, the middle-aged woman who finds a baby in the sand and passes it off as her own.

PRAISE FOR THIS BOOK

‘The stories move seamlessly between the familiar and the surreal, between reality and fantasy, sanity and madness… The attention is focused as through a magnifying glass and we are hooked, drawn into an imaginary world of which we wish to know more… her spare, concise, clear style is ideally suited to a genre in which every word must earn its keep.’ —Hazel Watson

Ambush’ is the perfect title for this collection as all the stories contain surprises that honestly surprise, that either make you laugh or gasp. She manages that rare thing in short stories of being unsettling withoutcrossing the line into pretension.” – Janet Thomas, A review from Gwales.com with the permission of the Welsh Books Council.

‘Already known for its poetry, Salt is developing an ever-stronger short-story list as well. The 15 pieces in Carys Davies’s darkly funny and unsettling collection usually begin with “quite small things”, only to edge gently into an emotional abyss in dank Welsh towns, airless Victorian parlours or mouldering libraries. The half-hidden passions of “Ugly Sister” could be a lost slice of Dylan Thomas, while the ousted Latin teacher of “Historia Calamatitum Mearum” has an Atwood-esque prickly wit that surfaces elsewhere. Arrivals and departures often trigger crises – but then, as “Metamorphosis” puts it, “Take-off and landing are the most dangerous times”’ —Boyd Tonkin

“A cracker of a short story collection” – Sarah Schofield

Buy a copy of Some New Ambush here.

Carys’ stories have appeared in magazines and anthologies and online, and been broadcast on BBC Radio 4. Recent publications include:

‘Miracle at Hawk’s Bay’ in Salamander

‘Creed’ in The Stinging Fly

‘Sibyl in Love’ in Sunday Magazine

‘The Redemption of Galen Pike’ in Love, Loss and the Lives of Women: 100 Great Short Stories

‘On Commercial Hill’ in The Dublin Review

‘Before it disappears’ is a chapter in the new edition of Short Circuit: A Guide to the Art of the Short Story

Carys Davies was the winner of the the 2010 Society of Authors’ Olive Cook Short Story Award, the 2011 Royal Society of Literature’s V S Pritchett Memorial Prize, a 2013 Northern Writers’ Award and the 2015  Frank O’Connor International Short Story Award. She has been shortlisted and longlisted for many other prizes including the Calvino Prize, the Manchester Fiction Prize, the Roland Mathias Prize, the Sunday Times EFG Short Story Award, the Wales Book of the Year, and the William Trevor/Elizabeth Bowen Prize. Born in Wales, she now lives in Lancaster.