We’re in the Entertainment Business

Devising ways to publicise my debut novel, Brixton Rock, the ever-inventive, Rosemarie Hudson, publisher of BlackAmber Books, came up with the idea of giving away a free stick of Brixton Rock with every purchase of the novel.  Local bookstores and their staff loved the notion (and tasted it during tea-break) and had enough enthusiasm to assemble eye-catching displays for my books.  For a small, independent press, you live or die on your marketing ideas and I benefited greatly from Rosemarie’s initiative.  It got me out there.

For my second novel, East of Acre Lane, I was published by Fourth Estate/Harper Collins.  For the paperback edition, they showed me the cover design of a young black guy wearing a T-shirt with the title emblazoned on it.  I immediately suggested that they should make and send these T-shirts to the likes of Lennox Lewis (who at the time was preparing for a big heavyweight showdown with Evander Holyfield) Ian Wright, Paul Gascoigne, Whoopi Goldberg, Grace Jones, Shaggy, Nelson Mandela, Mark Hamill from Star Wars and other sports stars, personal heroes and celebrities.  I’m not sure if my PR had all the contact details on my wish list but I did spot a counter assistant at Borders bookstore in Oxford Street, wearing said T-shirt (RIP Borders – I loved that store)  Did I feel good that day!

The capacity for books in stores is dwindling (the last time I visited a Waterstones they seemed to stock more board games, mugs and toys than books) so we need to modernise our marketing techniques, reach and hold the public’s attention span and be creative in selling our product.  Why can’t authors or editors present a one minute presentation of their latest novel that is made available to librarians, bookstores and retail internet sites?  It’s no longer good enough to simply place newly published books in a jiffy bag and send them off to broadsheet literary editors, The Bookseller, the ladies on Loose Women and whoever decides which novels will be read on Radio 4.  Our industry needs to be yanked into the 21st century.

Recently, I attended the Edinburgh International Book Festival and I was lucky enough to be paired with the ridiculously talented Catherine Doyle, author of Vendetta (fantastic read by the way). In our panel discussion, she was engaging, funny and generous.  We both performed readings and I’d like to think the audience drifted away feeling satisfied.  But I wanted to give them more.

When I launched Brenton Brown, I was fortunate enough to know the acclaimed stage and film actress, Adjoa Andoh (she’s a fellow Brixtonian and lives around the corner from my aunt) she has worked alongside such luminaries as Clint Eastwood, Morgan Freeman and Matt Damon.  I practically fell on my knees and asked her if she would like to perform a reading of Brenton Brown.  She agreed.  Yaaaaay!  Her reading of my work was sublime.  The audience hung on her every tone.  She understood where to slow or speed up her cadence, where to find the precise emphasis and pitch.  To this day, my guests tell me that was the best literary reading ever and I didn’t utter a word.  How I wish I recorded her!

It struck me then that most of us writers don’t really have a clue if we’re presenting our work in the correct way.  I for one have never been schooled in that art by any publisher.  They inform you that there’s a reading at such and such a place and you have to get on with it.  But we could do so much more.

At the premier book festivals why can’t the organisers/sponsors commission two or three actors from a local theatrical company?  For those who are not so comfortable reading from their work, allow the actors to re-enact a scene from the book or read from it.  Let them bring the characters alive for the audience.  They can do it so much better than us.  Let’s employ pre-recorded sound techniques, the technology is available – festival crowds should be able to hear the killer slowly climb the stairs and the creak of a door.  It’ll be a new enhanced experience for everybody and give events a further theatrical attraction.

We are competing with other art forms: the cinema, theatre, comedy, sports and so much more.  Whether some like it or not we’re part of this entertainment industry.  We can’t afford to be too precious about it.  We have to focus our minds on improving our marketing strategies, showcasing the best of our talents in a progressive way and creating that Wow factor in our foremost literary occasions.  Luke Skywalker may not have worn my East of Acre Lane T-shirt, but at least I had the ambition.  Our industry needs to start dreaming big again. 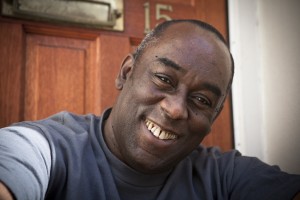 Born in London of Jamaican parents, Alex’s first book, Brixton Rock(1999), tells the story of a 16-year old boy of mixed race, in 1980s Brixton. Brixton Rock was adapted for the stage and performed at the Young Vic in 2010. Its sequel, Brenton Brown, was published in 2011.

His second novel, East of Acre Lane (2001), has a similar setting, and won a London Arts Board New Writers Award. A prequel, Island Songs, set in Jamaica, was published in 2005,  and a sequel, Dirty South, in 2008.

Other novels include In The Seven Sisters (2002), in which the scene moves to Surrey in 1976, where four boys escape from an abusive life in a children’s home; and Checkers  (2003), written with Mark Parham, was published in 2003.

In 2010, he wrote the one-man autobiographical performance, Uprising.

Alex Wheatle lives in London. He was awarded an MBE for services to literature in 2008.