“A Man Lies Dreaming purports to be an interwoven narrative following ‘Wolf’ (quickly revealed to be Hitler) and Schlomer. Schlomer the choice of the second narrator ‘in another time and place’, is as ‘real’ a person as Hitler a Pulp fiction author but most readers would be unaware of this for he left no mark on popular culture his work is not in the canon or easy to track down. Schlomer’s anonymity is shown in juxtaposition with the infamy of the narrator with whom he shares the page. In this way A Man Lies Dreaming is a meditation on celebrity and of what we leave behind on this earth when we depart. Art, yes – but does it endure? Hitler was certainly notorious, but was his death any more or less ignominious than Schlomer’s?”

“There is much to be squeamish about – Hitler engaging in sexual fetish and water-play with a Jewess; Hitler parading as a Jew and getting passage to the promised land – much that is too appalling to contemplate that you wonder how Tidhar managed to write it. The novel brims with brutal irony. While readers might be swept up in the intrigue of the cases, the missing sister or the human trafficking, we are again and again brought back to ‘reality’ when Shomer’s POV intersects. Ultimately, enmeshed with the disturbing parallel history is a moving ode to the power of imagination in an utterly hopeless situation. ” 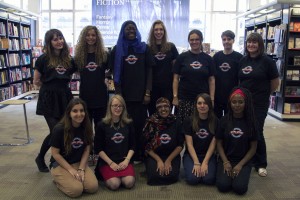 The Jerwood Fiction Uncovered London Reading Group 2015 was the London Short Story Festival volunteers. Run by Spread the Word, London’s writer development organisation, the volunteers are a group of keen writers and readers from across London who support the running of this exciting literary event.